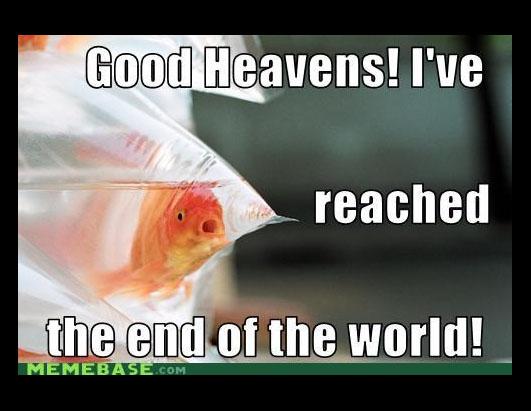 Note to my fellow bloggers: I do apologize: I have been suffering from a deplorable lack of energy and a ‘slight’ (!!!) case of writer’s block. I THINK I am back – I sure hope so. Looking forward to catching up on your blogs…

I am fascinated by end-of-the-world movies. When a new end-of-the-world movie comes out on Netflix, my husband, the Official Movie Finder in the family, always bookmarks them so we can watch them later. He seems to know just when to announce his latest find, always waiting until I am slightly grouchy about something, and deriving great pleasure at watching me as I instantly cheer up at such delightful news.

Unlike me, my husband draws the line at the really bad end-of-world movies, but I even find those ones endlessly entertaining. The awful ones are so badly put together that they can be hilarious: the lava in a deadly (world-wide, of course) volcano is clearly a close-up shot of ketchup running down little slope of pebbles; a deadly (again, worldwide) earthquake is depicted with the actors running and swaying about while the cameraman jiggles the camera to-and-fro. The bad end-of-the-world movies are always set in the United States (as if facing the apocalypse anywhere else is just too boring to even consider); there is always a potential romance (two really good-looking people who hate one another on sight so you just know they’ll be kissing before the movie is finished); an older, geeky, bespectacled professor-type and finally, a few requisite teenagers. At least one of the teenagers is so skilled at computer technology that he or she could hack into any computer system on the planet. They are that good. And of course, somehow, this little band of misfits always. saves. the. world…

At the last possible second, of course.

I love end-of-the-world books as well but with them, I am quite a bit more discerning in my tastes. I have read Stephen King’s The Stand so many times that I should almost be able to quote all 1153 pages of the final, extended edition by heart. I really enjoy King’s Cell and The Dome as well. I adore The Road, by Cormac McCarthy.

And let’s not even get started on TV shows like The Walking Dead.

I have been sitting in front of my computer, trying to pinpoint the moment when my morbid fascination with end-of-the-world scenarios became a bit of an obsession, and realise it was when my husband and I went to Cuba on our honeymoon. It was beautiful there, but there was no Internet access at the time, and virtually no way for our teen-aged kids to contact us should the need arise. I felt trapped. Here I was, on a landmass surrounded by ocean, with absolutely no way of getting to the kids should some catastrophe occur (like, say, the cooling of the centre of the earth, the release of genetically-engineered dinosaurs from a remote island or a zombie apocalypse, just to name a few of the more plausible examples that came to my slightly-panicked mind). I was so obviously jittery that I finally had to confess to my new husband that I had always had this idea – in the back of my mind, of course – that should the end of the world occur, as long as I was on the same landmass as the kids – even if they were at the southernmost tip of Argentina and I were in Nunavut, Canada, technically, I could walk to them if I had to. At this point, my husband very reasonably pointed out that should any of those scenarios occur we would likely all be dead but I – the Queen of the End-of the-World Movies was not so easily deterred. When it comes to movies about the apocalypse, I pointed out, there are always survivors…. Nor could he sway me with the argument that these movies were perhaps ‘not all that realistic’. “If someone could come up with a believable story where Bruce Willis lands on an asteroid and saves the world,” I told him, “then it is possible that it could also technically happen in real life.”

Luckily, my husband didn’t divorce me then and there on the grounds that he had obviously married a raving lunatic, and he even had a great time reporting my crazy shenanigans to our kids when we (safely) arrived back home. But the Cuba trip turned out to be just the beginning of my worry woes. As the years progressed, it became clear to me that our daughter will be a traveller until she gasps her last breath. At the ripe age of 25, she has already seen more of the world than I would ever hope to. Even worse, she doesn’t care about Godzilla taking over the earth, or asteroids, or the sudden halt of the earth’s core. She doesn’t mind not being on the same landmass as her mother (I wonder if there might be a message in there for me…?) Even our son – much more of a homebody – has already travelled far more extensively than I have. So, on a regular basis, I must live with the terrible knowledge that I could not walk to my kids if the end of the world happened.

I know that I am not alone in my obsession. Perhaps 15 years ago, I began noticing that some people were taking the threat of the imminent apocalypse far more seriously than I was. Some people were hoarding food. Others were stashing weapons. The really serious folks were calling themselves preppers and building underground bunkers. Clearly, I had some catching up to do. I started picking up little things here and there: tiny, useless fishing kits, little boxes of candles at the dollar store; a few of those dreadful little shiny space blankets, a couple of books on how to store food (I should mention that I have yet to actually buy or prepare said food…).

I recently brought out my tiny little bin of end-of-the-world dollar-store paraphernalia and determined that best-case scenario, my husband and I would survive an apocalyptic event for maybe three days, tops (even less, if zombies are involved…). All in all, I have come to the conclusion that my family is woefully unprepared for the apocalypse, or an EMP, or nuclear war, or a world-wide earthquake, or an asteroid, should anything like that come along. My family is just going to have to count on the reams of subconscious survival information I have stored away in my brain from watching all those end-of-the-world movies and reading all those end-of-the-world books.

9 thoughts on “The Queen of the End-of-the-World Movies, at Your Service”